WHAT IS THE ‘BERLIN PROCESS’

The Berlin Process is an initiative that was launched on August 28, 2014, by the German Chancellor Angela Merkel in Berlin. This initiative has provided a unique contribution to WB6 regional cooperation, to investments in regional connectivity infrastructure, and to the reforms engaged by WB6.

The Berlin Process does not have a proper budgetary allocation neither for its functioning, nor for financing “its projects”. It is the Chair of each Western Balkans Summit (WBS) that covers the Summit costs. Its transport and energy projects are “borrowed” from the project list of EU Connectivity Agenda, and their financing comes from a mix of sources ranging from WB6 national budgets, Instrument for Pre-Accession (IPA) to International Financial Institutions (IFI), bilateral, and Public-Private Partnership formulas.

Cooperation and Development Institute has since 2015 regularly monitored this initiative and provided the much-needed platform for a qualitative debate in its Tirana Connectivity Forum, the only such event covering connectivity, reforms and enlargement in the South Eastern Europe region.

THE BERLIN PROCESS: SUPPORTING THE ENLARGEMENT

The Berlin Process builds up on the achievements of the Enlargement process and on the advancement of reforms engaged by WB6 countries. The success of Connectivity Agenda or WB6 regional cooperation depends on the progress of each country in fulfilling the Copenhagen criteria and on sustaining the reform path. The quality of infrastructure projects submitted to IFI for financing reflects the degree of development of institutions built in the Balkans during the last 20 years. Their successful implementation is an indicator of the state of the rule of law applied in this region. The achievements in regional cooperation reflect the maturity and the alignment of Balkan politicians and policy-makers with the EU policies.

On the Western Balkans Six road to full EU membership, the Berlin Process dynamics is a major contributor of physically linking WB6 through roads and energy systems, as wells as through institutional connectivity and p2p connectivity.

The Double-Track profile of Berlin Process 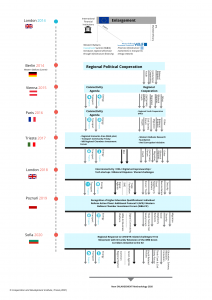 BERLIN PROCESS AND THE WAY FORWARD

The latest Western Balkans Summit was the Sofia Summit organized on November 2020. The joint Declaration stated that the European Commission welcomes the commitment expressed by the Western Balkan leaders to further strengthen regional cooperation as a way to advance on their European path. The region’s positive response to the Economic and Investment Plan, its commitment to enhanced connectivity and endorsement of key initiatives such as the establishment of a Common Regional Market, the launch of a Green Agenda for the Western Balkans and further support to Roma integration will help accelerate the post-pandemic recovery by spurring on sustainable economic growth.

Concerning the future of the Berlin Process, the Chair’s conclusions reads that it remains an instrument aiming at regional cohesion, concurrently providing convergence with the EU single market, and that it is a meaningful accelerator of regional connectivity.

*The next Berlin Process Summit will be held in Berlin in 2021.

A more comprehensive list of documents and publications concerning the Berlin Process can be found at ORC Library.